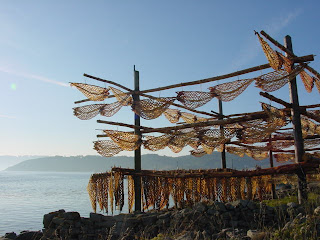 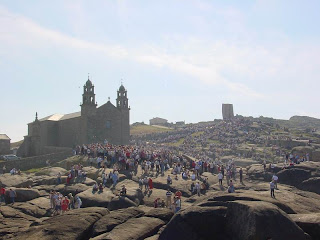 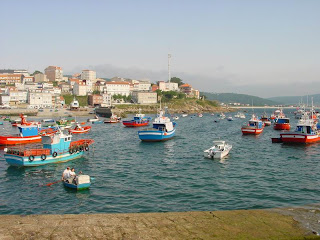 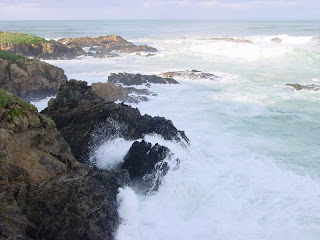 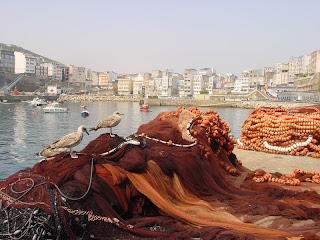 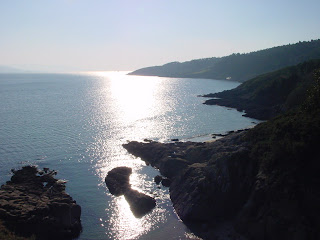 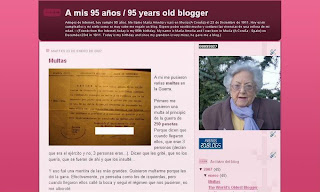 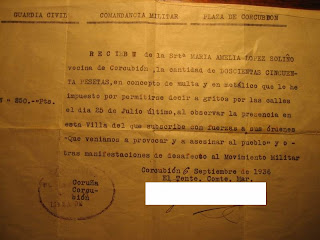 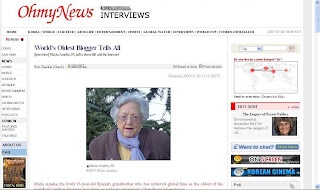 Maria Amelia, 95, talks about life and the Internet

Maria Amelia, the lively 95-year-old Spanish grandmother who has achieved global fame as the oldest of the world's 63.2 million bloggers, has given an exclusive interview to OhmyNews International.

We emailed our questions to Liz Parry, editor of Spain's leading English-language newspaper, SUR in English, who kindly translated them into Spanish, which we then sent to Maria. She responded in Spanish, and Liz translated her answers into English.

Maria's blog, which she says was given to her by her "stingy" grandson as a birthday present, has a big following in Spanish-speaking countries, including South America, and in the Netherlands, where a Dutch translation is posted. In a single month her blog chalked up 51,000 hits.

Maria recounts her stories, in which she discusses current politics, her daily life, and memories of past events, to her grandson, who posts them for her.

She discovered the Internet a year ago. "I think it's great that you can find everything there," she said. "You can read the news and about people's lives. It's the best discovery that I've made in my life.

"It all surprises me. It seems like a dream, like witchcraft. If my grandparents arose they would hallucinate (when they first listened to a gramophone, they thought there was someone inside it)."

In less than a week's blogging, she recalled the outbreak of the Spanish Civil War in 1936, the "black tide" of fuel oil from the tanker Prestige which broke in two and sank off Galicia's Death Coast in 2002, bulls in A Coruna (formerly La Coruna) and old-time gallantry.

Here, then, is our interview:

- Are you pleased that you have achieved international fame as the world's oldest blogger?

Yes, I am pleased, but if there were others older than me I'd be pleased too.

On Dec. 23, when I was given the blog. It was my 95th birthday and my grandson gave me it as a gift. Then we got to work. He told me to start talking and I did, and within minutes people were there talking to me! I was amazed, I'd never have believed it. I thought two or three people might answer me....

For something to do. I thought it was a nice thing to do, amusing, entertaining. ... I wanted to meet new people, and now I meet people all over the world! When I started I didn't realize it would be people everywhere, or I might not have gone ahead, but now I have got used to it.

- How much time do you devote to blogging, and do you enjoy doing so?

I enjoy doing it. When my grandson has time, I talk and he types for me.

- Would you consider getting someone to translate your Spanish blogs and posting an English edition? I'm sure that would attract thousands of English-speaking visitors to your site, and they would enjoy reading what you write.

I don't speak any other languages. People write to me in English and I can't reply to them. Who would have thought it?

- What do you write about?

Anything that occurs to me. Everything.

- Do you receive many emails as feedback? Do you reply to them?

- How do you spend your day when you are not sitting in front of your computer?

I watch television, listen to the radio, look at the scenery a bit. I can't get out much at the moment because it's winter... today for example it's terrible weather for going out.

- The 94-year-old Swede, Allan Loof, who is now the world's second oldest blogger, told me when I interviewed him last month that he intends to write his autobiography. Have you any plan to do the same?

No, I am just an ordinary woman.

- What are your earliest memories?

My first memory is of hearing people talk about a war, which was the World War, the First World War. I would be about three... And then when I was five or six, there was 'flu. Everybody had it, everybody in the village was ill.

We had to take San Marcos (St Mark) out in procession -- he was the patron saint, and prayed for the people who were dying of 'flu.

They used to starve people. It was all tea, tea, tea... that's what they gave people, they weren't allowed to eat. We were all ill and my father looked after us. When he went for a rest, I would go up very quietly, because we lived in a two storey house, very quietly... and there was a box of biscuits on the sideboard in the dining room, and I would stuff myself with biscuits and go back down again.

I was the first to get over the 'flu. The doctor came and said "This one is doing best, this one is better..." And the others were weak from so much tea. And I got better.

When my parents realized that the biscuits were gone, they asked me who'd eaten them. "Me. I ate them." "Well, you got better, so obviously what this fever needs is feeding."

There was a hunchback who lived opposite, and he ate two fried eggs and died. That's why they started just giving us tea. It was ignorance.

- Have you ever traveled abroad? Have you visited Australia?

No, not to Australia. I've been to Italy twice. It's lovely, I saw it all. And I've often been to Portugal, I know the whole country. And France, I know the Cote d'Azur.

- As a great-grandfather myself, I know how delighted you will be when your first great-grandchild is born. Can you tell me a little about your family?

I am looking forward to being a great-grandmother. The main thing is that the baby is healthy, that's what matters.

- Do you have any eyesight problems? That would be a dreadful handicap, particularly to anyone working with a computer.

I am short-sighted and I wanted to have an operation, but it wasn't possible. I can't have an operation for cataracts or short-sightedness because I am taking some medicine, and if I stop taking it I could have a stroke. So I struggle on, but sometimes it is not easy. I can't see too well, I have to hold things close, or make the fonts bigger.

- Would you like to send a message to the world's 63.2 million bloggers, all of them younger than you?

I'd like to send them all greetings and hugs and wish them happiness. And may the Peace of the Lord be with us all -- that is the greatest happiness possible. Peace, harmony and good sense.

- Is there anything else you would like me to write about you?

There is nothing more to say, my life is a very simple one. I was a girl, I grew up....

Congratulations and best wishes, Senora, from Eric in Sydney, and OhmyNews in Seoul, South Korea.

Eric Shackle is a retired journalist whose hobby is searching the Internet and writing about it. He is author of The World's First Multi-National e-Book, http://bdb.co.za/shackle His work has been published by the New York Times (US), The Observer (UK), Globe and Mail (Canada), Straits Times (Singapore), and the Sydney Morning Herald (Australia). He writes for webzines in US, Canada, UK, South Africa, South Korea and Australia, and is copy editor of Anu Garg's Seattle-based A Word A Day free newsletter, which is e-mailed five days a week to more than 600,000 wordlovers in 200 countries. 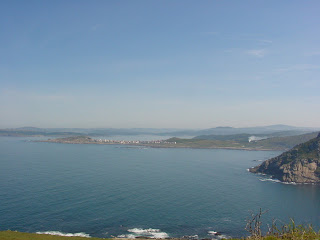 Pero no creo que a mí me voten, no sé... Yo creo que hay personas más interesantes que yo. 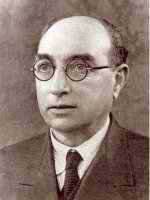 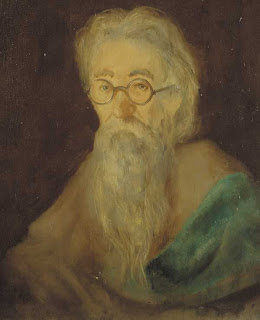 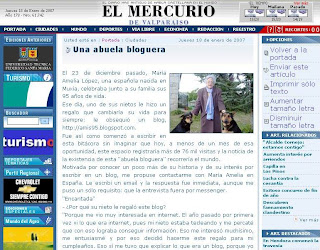 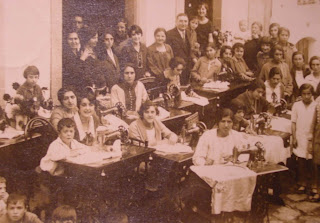 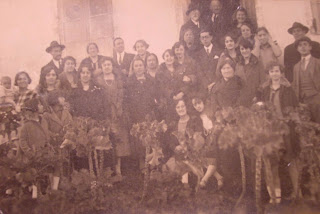 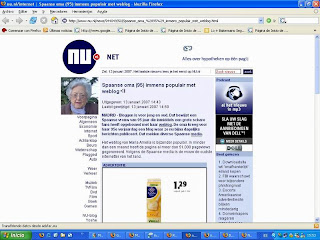 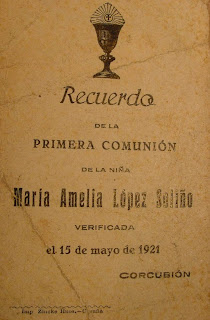 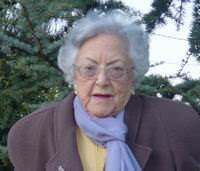 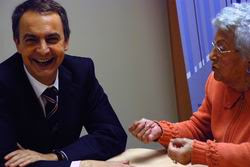 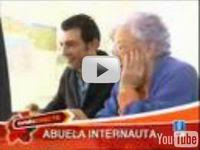 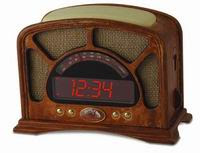 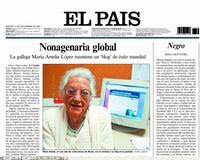 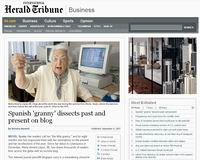 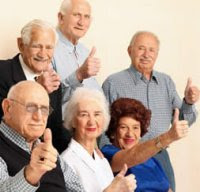